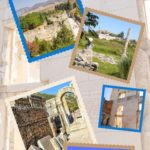 Maybe you’ve visited the ancient city of Ephesus and seen the Temple of Artemis. When I visited, I was awestruck. Can you believe the original building materials, such as marble, are still functioning? What magnificence in construction and design!

May I introduce you to Artemis, the twin sister of Apollo and the daughter of Zeus and Leto. Artemis is noted in mythology as a primary goddess of childbirth and midwifery. When I visited Ephesus, I didn’t notice any pilgrimages of pregnant women or a similar scene. Who knows? Maybe there are such things. If you happen upon such an event, please let us know and share a picture or two.

A temple created in her name

Destroyed the night Alexander the Great was born

Since 1923, the most interesting history lesson on earth

Ephesus is an archeologist’s dream. Since 1923, social scientists have studied this excavation site where everything is a piece of a giant jigsaw puzzle. The dwelling exhibit gives a history lesson on mankind. Think about the differences between the Ephesus way of life living so closely for the sake of mere survival compared to today’s with technological tools allowing us to live far apart.

I wasn’t able to visit, but the other Ancient Wonder in Turkey is The Mausoleum of Halicarnassus, which was built in 351 BC. The mausoleum houses the tomb of Satrap Mauslos, a very influential Persian whose vision guided the creation of the beautiful city.  Halicarnassus is located in the present-day city of Bodrum.

Want to know the remaining five Ancient Wonders of the World?

The Great Pyramid at Giza

You probably guessed “pyramids.” But the Great Pyramid is the correct answer. Did you know for close to 4,000 years the tallest structure in the world was the Great Pyramid? This wonder was hand-built for Pharaoh Khufu between 2584 and 2561 BC.

Statue of Zeus in Olympia

Phidias, the Greek sculptor also known for his talents in building the Parthenon, created the 40-foot tall statue of Zeus in the 5th Century BC. After the popularity rise of Christianity, the masterpiece was moved to Constantinople. The Zeus statue was destroyed by an earthquake in the 5th or 6th Century AD.

The Colossus of Rhodes is a statue of the god Helios. Located on Greece’s isle of Rhodes and built between 292 and 280 BC, the Helios statue only existed for 56 years before crumbling thanks to an earthquake, according to history books. It was more than 110 feet tall.

In concert with the Aegean Chamber Orchestra 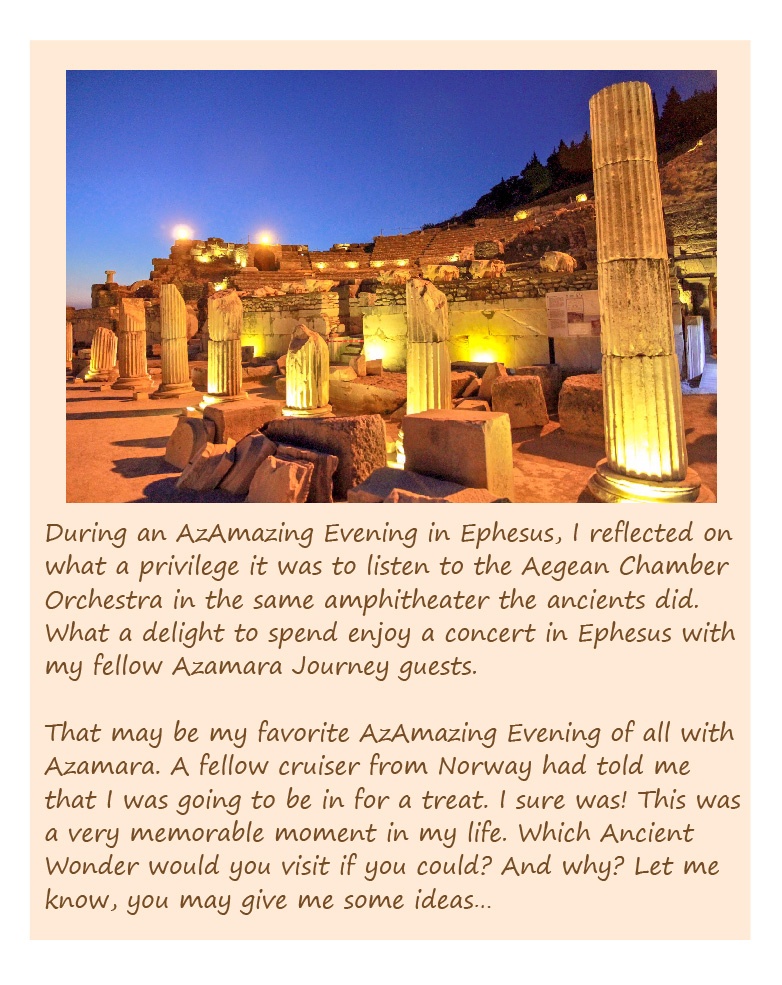 Ancient wonder forever in my future

Ephesus will stay with me for the rest of my life. I visited this fabled place on a cruise ship excursion. (You can read about the Greek Island cruise here.) I would do this cruise again in a heartbeat, perhaps ending my trip with island hopping since a cruise only gives a teasing taste of each destination. Hope to see the rest of the world soon. In the meantime, I will explore the Washington, D.C. metro area.

Safe travels for those who are lucky enough to do so during this strange year.