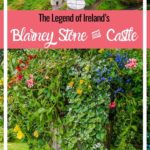 The legend of Blarney Castle and its Stone dates back centuries. Read the colorful history of Ireland’s most famous attraction and learn how to kiss the Stone.

The Blarney Stone is considered Ireland’s most famous attraction. Excepting this time of Coronavirus, about 400,000 people from around the world visit Blarney Castle to kiss the Stone each year. The folklore is those who kiss the Blarney Stone will be eloquent and articulate.

Located in County Cork, Blarney Castle originally was built as a wooden structure in the 10th century. Two-hundred years later, it was replaced with a stone castle. In 1446, Dermot McCarthy, the King of Munster, had the third and current Blarney Castle built.

Queen of Elizabeth I ordered McCarthy to give up the castle to show his allegiance to her. His excuses for delay were so eloquent that they became renown in court and referred to as “more Blarney talk” by the Queen.

How to Kiss the Blarney Stone

Kissing the Blarney Stone is an adventure. A bit nerve-wracking but fun. First you climb 120 narrow, uneven, and slippery steps to the top of the castle. Next, lie on your back. Then, stick your head outside the castle wall. Now, lean back, hold the iron rails, and kiss the stone. Basically, you are kissing the Stone upside down, but don’t worry, an attendant holds on to you. The experience happens very quickly.

Winston Churchill kissed the Stone in 1912. Along with his statesmanship, Churchill’s speeches and radio addresses are thought to be how morale was kept alive in England during World War II.

University of Glasgow geologists determined in 2014 that the Blarney Stone is “made of 330-million-year-old limestone local to the south of Ireland.”

Other Blarney Stone legends include it:

Even if you are not in search of the gift of gab, Blarney Castle is well worth the trip. Its ruins and 60 acres of surrounding parkland are quite enthralling. There are a poison garden and a fern garden along with Witches Stone. Also, save some time to explore the Woodland Walk and Lake Walk. Thanks to Ireland’s rainfall, up to 225 days a year, the grounds are rich in color and foliage. It’s easy to see why Ireland is called the Emerald Isle.

The 40,000-square-foot Blarney Woolen Mills offers an exceptional variety of traditional Irish products that are perfect gifts or souvenirs for yourself. Plenty of options on the iconic Aran Island fishermen sweaters, textiles, crystal, and Belleek china with its pretty shamrock design. Prices are competitive, too.

Previous to my visit, the Blarney Castle was not on my bucket list. Now, and this is no malarkey, I rank it as one of the most enjoyable tourist spots I’ve ever visited. I hope you’ll add it to your list. You’ll be glad you did.

Last thing, if you love castles and gardens, particularly those of the North Atlantic variety, then you must visit Scotland’s Inveraray Castle. It’s a bit of a trek from Blarney, County Cork so think about ferrying from Dublin. I lucked out, as Blarney and Inveraray were on my cruise itinerary. Here’s a peek at the best garden in Scotland is at Inveraray Castle. It’s never too early to start planning.