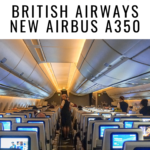 British Airways’ first Toronto to London flight in its new Airbus A350-1000.

Here’s how a British Airways representative summed up the excitement, “We’re thrilled to be launching our new A350 from Toronto, a city we’ve flown to and from for nearly 60 years. The A350 and our new Club Suite business class seat deliver new levels of sophistication, comfort and privacy, and we’re proud to share this with our Canadian customers”

Allow me to introduce Steven, British Airways Customer Service Manager. He is part of the integration team and really loves the new plane. On the A350, I was given a suite, which, honestly, is almost larger than many office cubicles I have seen.

Love that accent — Steve, describes the workings of the touch screen technology. “Bed mode” literally at your fingertips! Built from carbon composites, titanium, and aluminum alloys, the A350 has greatly reduced noise, a very welcome feature to go with the bed mode.

I love the fact that that you have your own two windows on the A350. Comfy on the inside and green on the outside. British Airways’ new A350 aircraft burns less fuel, reducing CO2 emissions.

I flew home to Dulles on the Boeing 747 and shared the middle aisle space in business class. In comparison, British Airways new suite felt so spacious as if it equaled two business class seats in the old Boeing 747.

I have. I’ve long wanted to take a peek where they rest. Kind of looks like a cross between a dorm room and an RV. It’s nice to know that the personnel have a place to rejuvenate.

According to Steven, the rest area gives British Airways the ability to increase the flight duty period, allowing for better passenger service.

The icing on the cake includes flat bed seats, 40% more storage with a vanity and mirror, WiFi, power, big screens (18.5”) for inflight entertainment, and a suite door for privacy. The feng shui of the A350 include high ceilings and ambient light working with the time of day and outside lighting gives passengers a true rest. Higher humidity feels so much better on the skin and the cabin pressure is that of 6,000 feet altitude.

When I shared my A350 experience on social media, the audience was as geeked out as I was with the adventure. I want to share testimony from one of my IG fans.

This from @chantalloupe: “I flew A350 to and from Asia this summer and even though I was in economy it was still much more comfy and spacious than virtually any plane I’ve flown, (except Max 8 which I flew in the spring). Also an incredible airplane. The comfort of this plane was the first thing I noticed!”

I love learning and sharing my #flyba experiences. Thank you for coming along this virtual ride with me. Hope you get to fly the A350 soon, you will definitely see and feel the difference.

Thank you, British Airways, for another incredible adventure. Stay tuned… for my London write-up of hidden gems.